Unlike the other days, I woke up early morning to an amazing view  that day. With so much excitement I got dressed up and packed my backpack for my first solo trip.

I crammed my backpack with a pair of clothes, a shawl, a towel, umbrella, sunscreen,

power bank, mobile charger, a 1L bottle full of water and Pringles, purse, passport wallet, my diary, my small first aid kit, and my Bible. For it was my first trip, and I was worried about the inconvenience that might cause carrying a heavy camera all the way, I decided to capture all my precious moments in my Samsung Galaxy S9.

I had a cup of hot black coffee for breakfast and bought a box of Pringles. Maybe the ambiance of the hostel or the Balinese breeze which had the strong smell of Duriyan catalyzed my excitement though I didn’t like that smell much.

I booked a ride through the Go-jek mobile application which I had already installed in my mobile, to Sanur Harbour Beach from my hostel. While waiting for the bike, I used my Citibank debit card and debited Rp.1000,000 ($68USD) from the atm in front of the Hostel. I had enabled the international transaction on my card previously. After 5 mins Ms.Anit Listigani picked me up.

The motorbike ride was fun. I enjoyed it, except the kisses of the sun, it was hot,and I almost got burnt.

Wishing me a great day, she disappeared.  I walked  through the harbor looking for Maruthi Express Speedboat,  about which I learned from many  bloggers and travelers. As pre-decided I headed looking for the Maruthi  Express Speedboat’s office and bought my boat ticket to Toyapekh harbor from there. Maybe because I’m too short, he gave me the ticket for a child. It cost me  Rp 350,000 ($24USD) or else I would have ended up paying Rp 500,000 ($35USD).

At times like this, I feel so happy about being short.My ticket was for a boat at 8:30 am, it was just 8:00 am. I waited there for another 15 minutes. Many speedboats and normal boats were berthed at the dock.

There are Speedboats and Normal boats to Toyapekh harbor. The speedboat will cost you around Rp 500,000 and you will reach the other side within 45 mins. Whereas the normal boats are much cheaper, but it will take more than an hour to reach Toyapekh harbor. 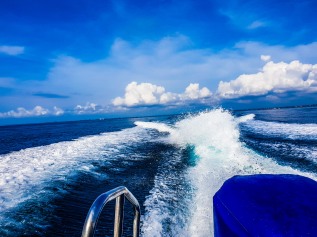 In case, if you are on a day trip to Nusa Penida, I would suggest you take a speedboat to Toyapekh and for the return a normal boat. Make sure you take either the roundtrip ticket or the return ticket as soon as you reach Toyapekh harbor. If you decide to buy the ticket at the last moment, they might be running short of it and you might get stuck on the island. Usually after 16:30 they don’t run any boat service. 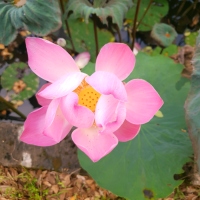