27th March 201824th August 2018 Saniah Mathews
The pain Liza was going through slowly took control of her. Her sensory receptors kept sending signals to her brain, they didn’t respond to any of the tablets she had.
She knew her mom won’t be able to take this. But it’s better for mom to have this pain now rather than crying for her, throughout the life. Her father will be able to take care of Mom, she will be happy in his hands, Liza thought.
The cold breeze from the ac pierced through her veins, she couldn’t feel the pain anymore. That brought a smile to her face. She was determined not to cry still, the image of her mom brought tears to her eyes.
She looked up. That room was so dear to her. She thought whether those days she spent there will ever come back. She felt so sorry. She shouldn’t have taken this step, she knew it… But she doesn’t have any choice.

She wondered why is she still in sense. She doubted whether death doesn’t want her. She tried to get up looking for her bag. But she couldn’t… she felt paralyzed.

She slowly closed her eyes, preparing herself. The image of her mom kept coming into her eyes. She regretted the decision she took. She wished if God could give her another chance.

If you hate your life, then try changing the way you live. Don’t be like Liza. She couldn’t take the burden she had in her heart so she gave up so easily like a coward.

There won’t be anyone on this Earth who wouldn’t have thought of quitting their life even once. It’s okay to think that way, you ain’t-a psycho, but we need to overcome that thought. Martin Luther King Jr., Eminem, Oprah Winfrey, Walt Disney, Owen Wilson, Britney Spears… all were so. Ideologies, money, fame, relationship… nothing could stop them from thinking about giving up.
Can you believe even Martin Luther King Jr. tried to give up once???
What if he wouldn’t have overcome that thought???
Nobody is immune to the dark depths of depression. Let the reason be anything, why don’t we just wait like a lion for a big elephant which will satisfy our days of hunger rather than satisfying us with something scanty???
Let me remind you!!! There’s a bright day waiting for us after every dark night…
There is no one in this world without a pain in their life. For everyone, their pains are bigger than the others.
Never give up!!!
Fight with everything and everyone that comes on your way. Like a warrior in the battlefield, fight until you get the chance to host your flag high. Let the entire world be against you, never keep a step back, unless you don’t have a plan to keep two steps ahead.
It’s ok to get hurt. None of the warriors who fought till the grave have remained unknown.

The ringtone that used to wake her up from the sleep, rang. She grabbed whole her strength and tried to get up. She wanted to see her mom again. She really wants to live…This is not how my story should end, she thought.

Just when the caterpillar thought the world was over, it turned into a pupa and then it became a beautiful butterfly🦋 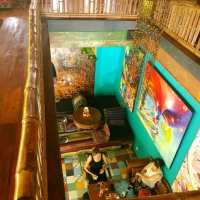